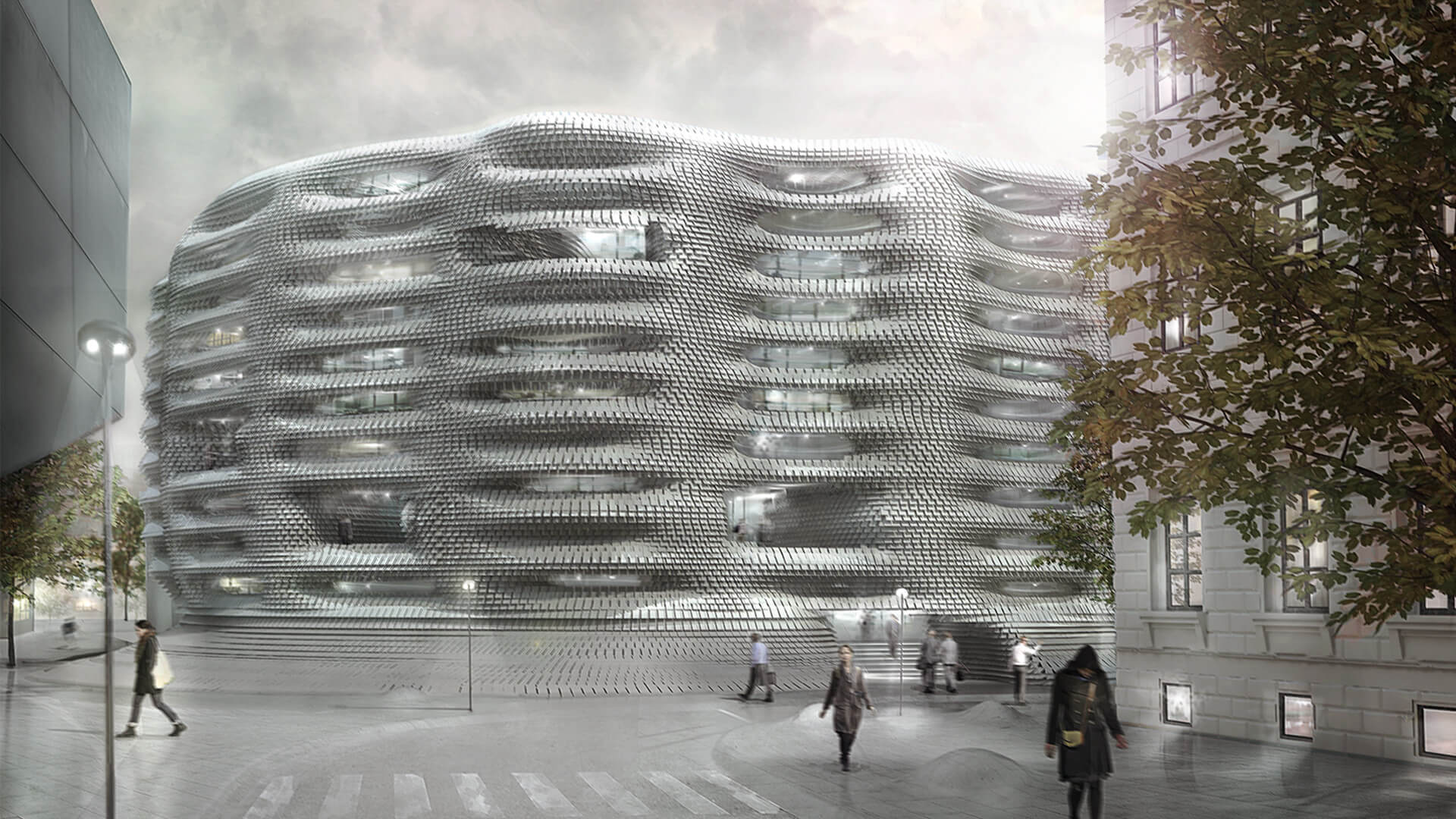 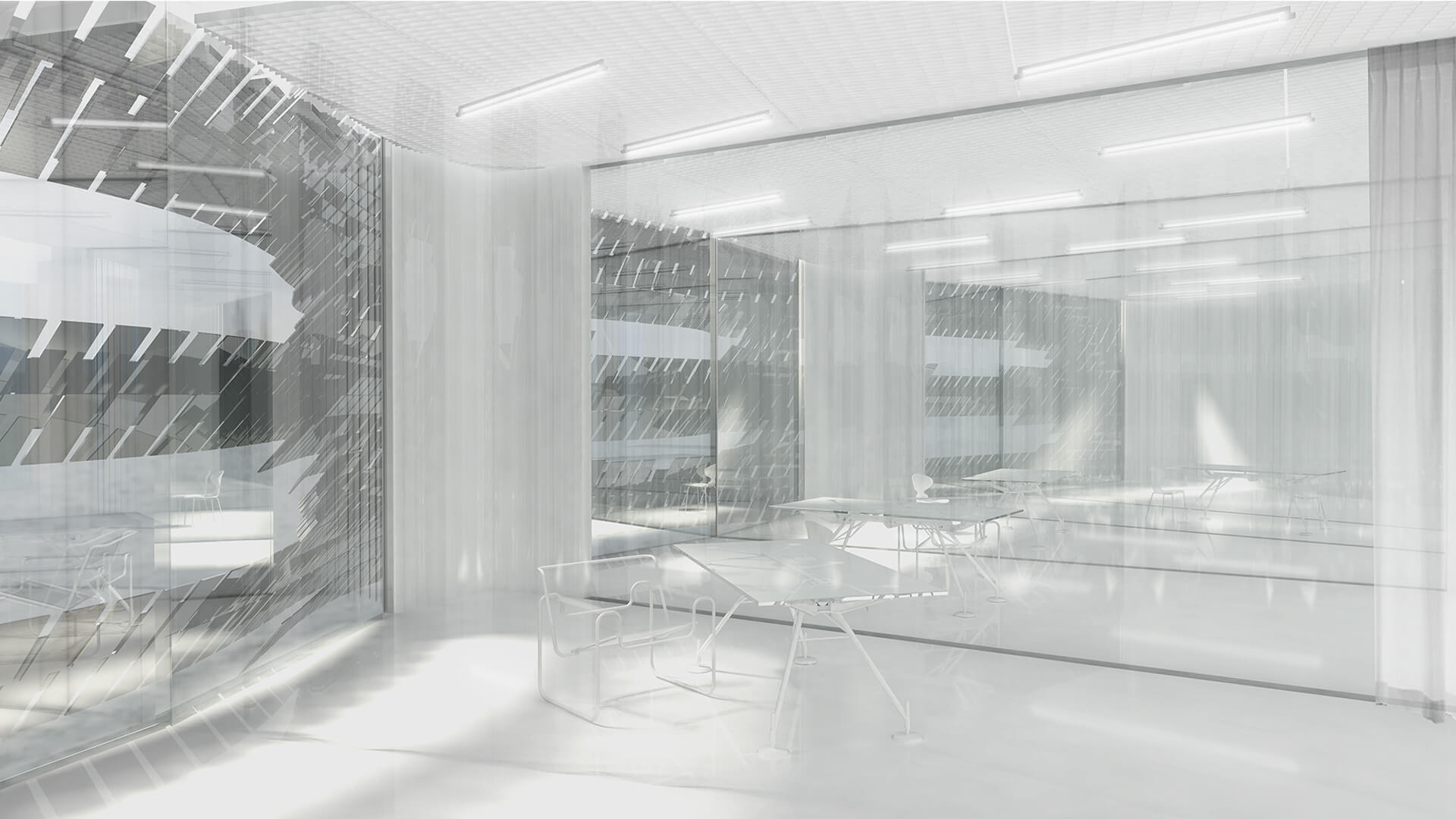 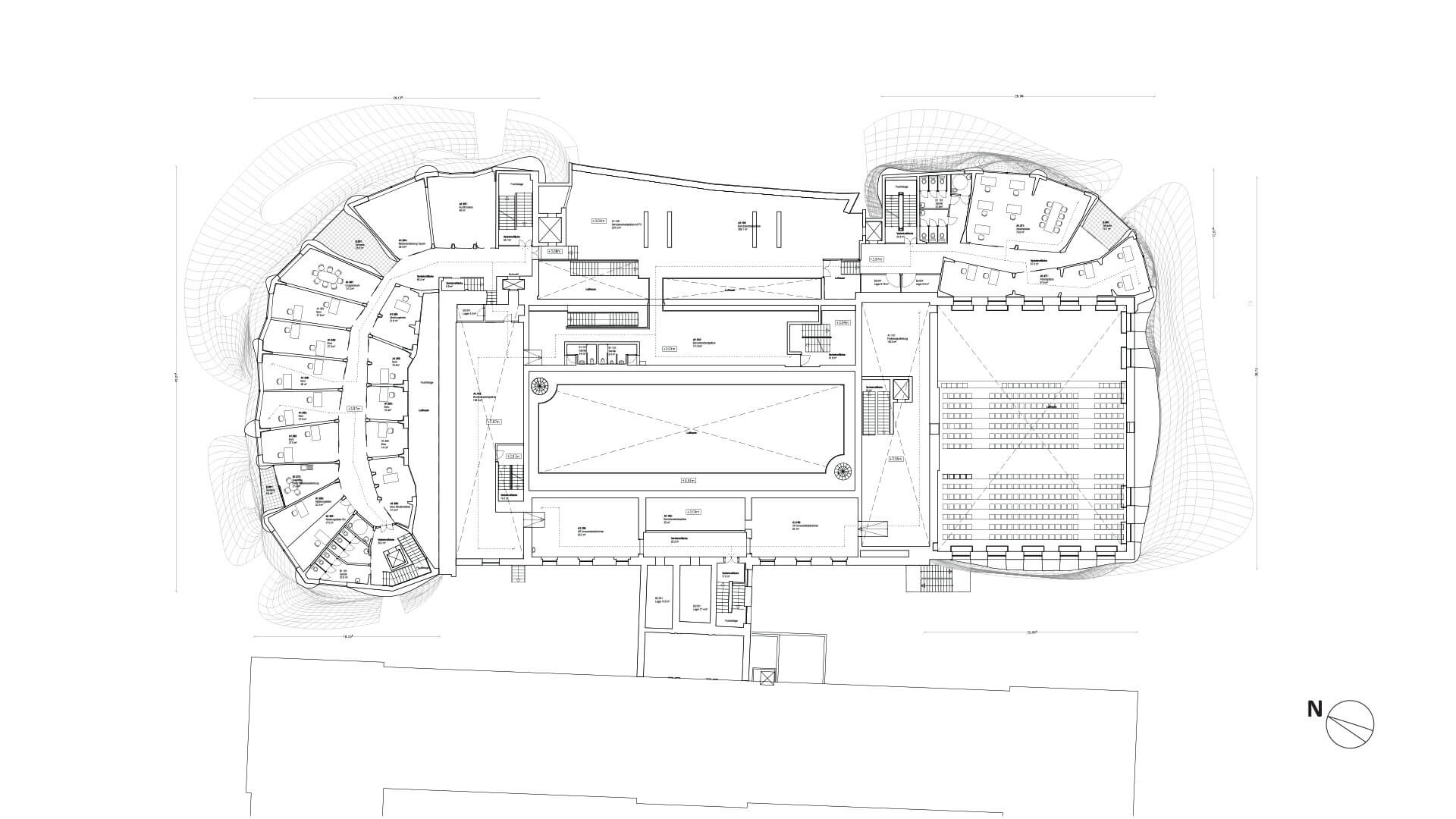 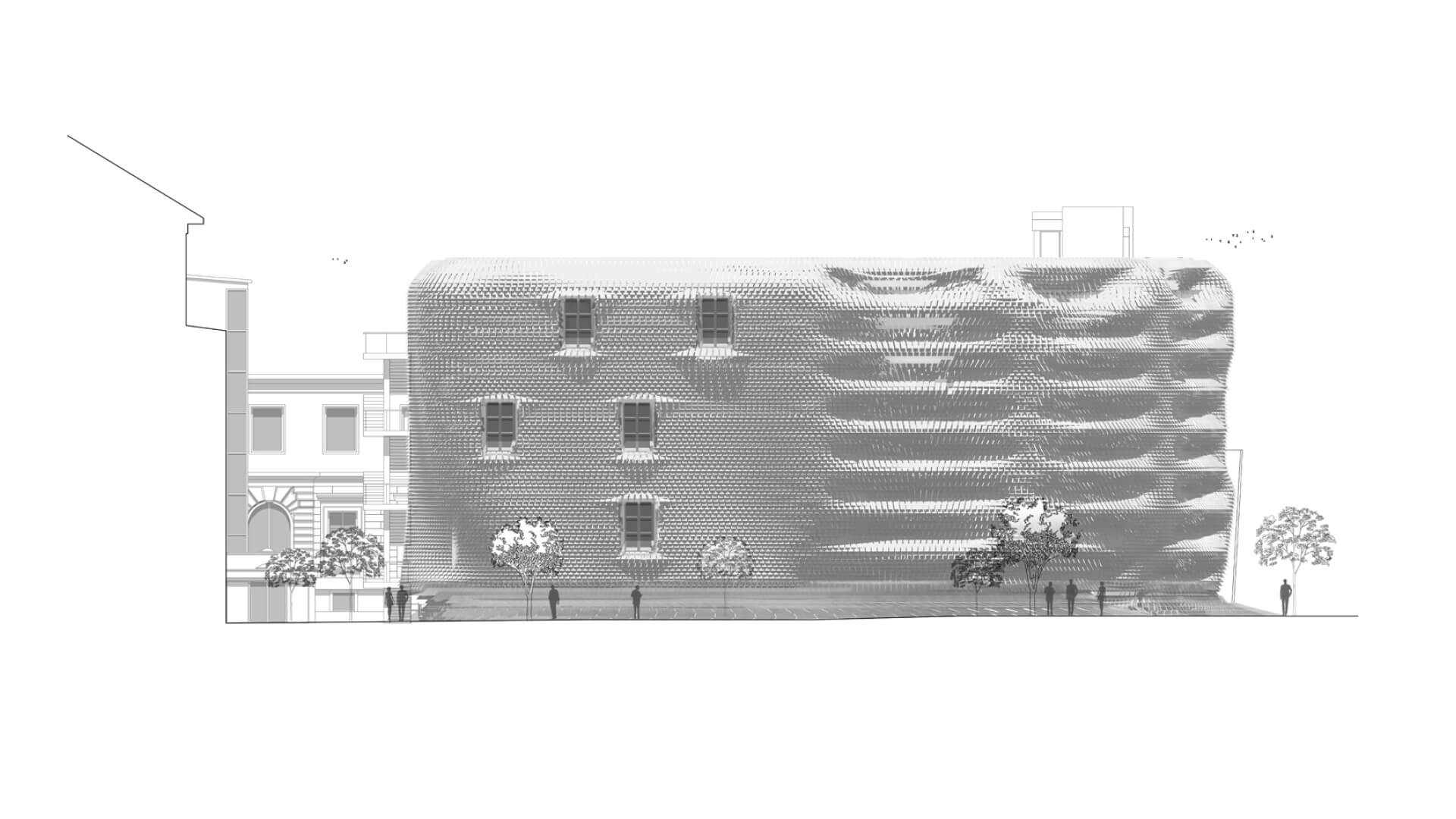 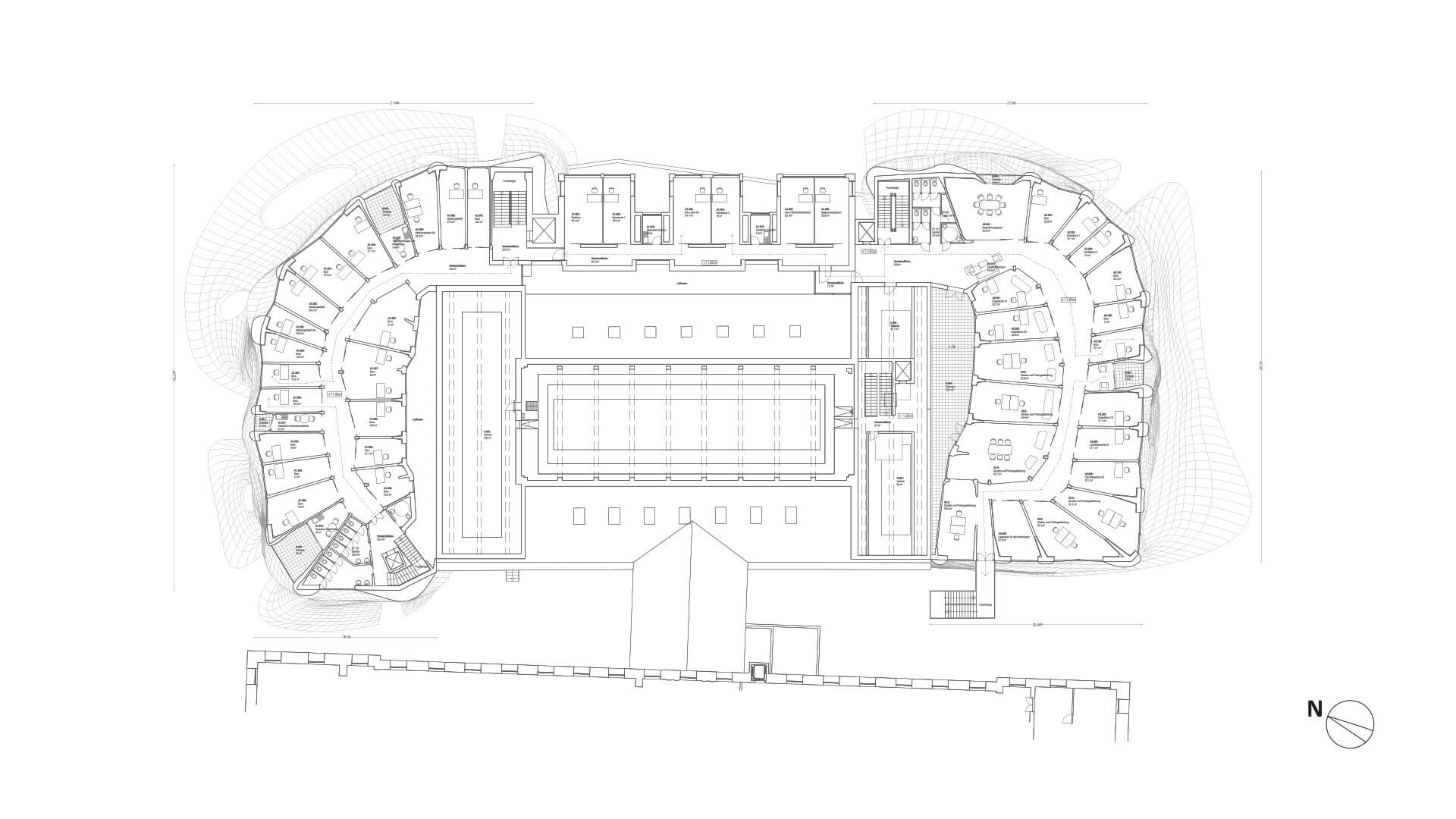 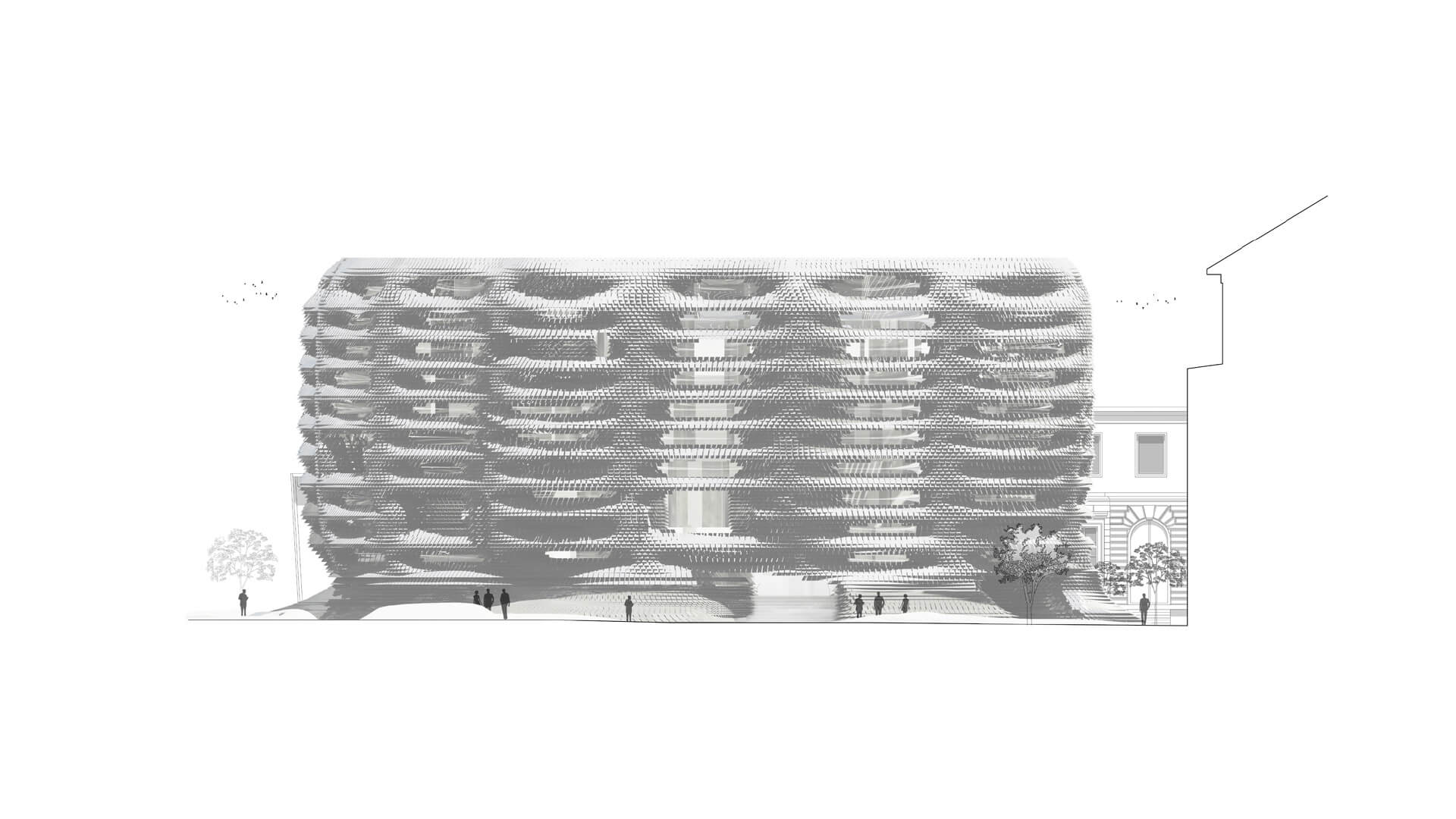 The objective of the competition was the renovation and extension of an existing university library in Graz, Austria. The total program included 15.000 sqm net room area. The existing library consists of four buildings from different styles and building periods. (A,B,C,D) The program included office areas, reading rooms, an auditorium and a student service center. Our Proposal implied two new buildings, the destruction of one and the renovation of the remaining three buildings

The character of the library is introverted. The exterior skin, made of Rheinzink coats the building, unifies the formally different building parts and directs the view to the inside. To disrupt the introversion of the offices and reading places one can find balconies where the exterior skin intersects with the polygonal interior volume. These invaginations are places of the public, of the multiple, the smells, the exterior world. The facade pulls inwards, and the borders of outside and inside blurs. These intermediate spaces are the paradise in between the lines, the moment of superimposition.

The discovery of paradise I the design of atmosphere :The project should evoke a refraction of perception, a differentiation of personal speed, from slow to fast, from public to private, from books to reality. It leads the visitor from the white square to the diffuse appearance of the library. An accentuated artificial landscape undermines the heterogenic building complex and unifies the structure. The bright concrete is in its horizontal language interrupted by vertical elements. The birch as the only vegetation underlines by its simple geometrical language, the minimalistic design of the square. Parking lots and its antagonists are planned in a duet; therefore, the car parks include already the holes for the trees, which are planned to replace the parking by a pedestrian zone. The newly planned neighboring building 27A becomes because of its formal aesthetics and placement a landmark, a gatekeeper to the new university square. Overlapping of transparencies I office design concept: The design of the office units was driven by the aim of the greatest possible flexibility. Every office unit regulates its privacy by the individual use of layers of curtains. The transparent and sound insulating material EPDM replaces massive walls where as visual a second layer of curtains provides protection. Both layers can be opened and allow the union of multiple offices to a big working group. The offices of Book and Media-processing were moved one floor lower with direct connection and internal accessibility to the offices of lending and the postal office. This strategy allows a more generous and flexible design of the main foyer with a better distribution of the office units and the circulation desk.

Make 4 on 1 I functional aspects: Important was the clear separation of the three different functional units per building part. Building A is designed as the library, building C and D as the administrative unit and building B, with independent access, as auditorium and student service center. This leads compact office units and reduces the walking distances. The extension of B links the former separated building parts. The student service center is a compact floor in building B, to create a clear meeting point for students without the unnecessary distribution of the offices on the campus.

Pangolin I alias ecological aspect: Due to its compact design it leads to a minimization of energy consumption. Silent Cooling is used to avoid draft and disturbing side noises. The building is cooled down by thermal activation of the building structure. (Ceilings with integrated cooling system, concrete core activation), powered by a heat pump, which is cooling and heating. Interventions to lower the cooling load imply mainly passive usage of solar energy, achieved because of the generous east and west glass facade. The shingle curtain facade serves as shading device, which allows due to a change of angles passive solar energy utilization. The whole building is equipped with day light controlled lighting.